Hi everyone! We hope you all are safe and well. Today’s blog post is by our guest contributor and Destination Freedom Tour Guide, EJ Murphy.

The American Civil War sesquicentennial anniversary, taking place from 2011-2015, brought many questions to the doorstep of the National Park Service. As far back as thirteen years before the anniversary commenced, park leadership met to deliberate over how the conflict would be interpreted at NPS Civil War sites. These discussions, and the subsequent development and implementation of programs coordinating with the sesquicentennial, lead to a 2017 report detailing the efforts made by the organization to tell a broader and more inclusive story of our nation’s greatest conflict.

The number one goal of the National Parks Service during the sesquicentennial, as listed out in the “Civil War to Civil Rights Commemoration Summary Report,” was to “move beyond the battlefield” and to “continue to broaden the stories of African Americans, other ethnic communities, women, and all citizens to address these larger economic, social, and political issues and offer parallels to the issues of today. Include civilian experiences and perspectives. Provide a more complete context for the war and its aftermath, from Reconstruction through the present day.”[i]

For many of the sites participating in the sesquicentennial this shift in focus helped attract visitors in greater numbers than during the preceding four years, with 63% of the 52 participating NPS sites seeing increased visitation numbers between 2011-2015 compared to 2006-2010. “Moreover, the variety of sites open for visitation compared to the centennial was important, with sites dedicated to Clara Barton, Frederick Douglass, Maggie L. Walker, African Americans in Boston, the Sand Creek Massacre, and women’s rights presenting new interpretations and perspectives to the sesquicentennial’s educational programming. All of these aforementioned sites experienced increased visitation compared to 2006-2010,”[ii] noted public historian Nick Sacco. 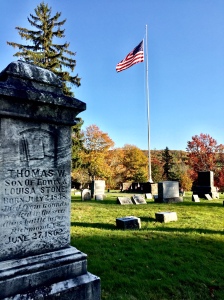 Since 2017, the same year that the report was released, the Waverly Community House (more commonly known as The Comm) has aimed to achieve the same goal as the National Park Service through the Destination Freedom: Underground Railroad Walking Tour of Waverly project. Grants Coordinator Gia Reviello began to develop the tour in early 2016 based off various primary and secondary sources, including manuscripts, books, and archived newspaper articles. A large portion of the research for the tour also came from Waverly native and former Philadelphia Inquirer journalist and editor Jim Remsen’s 2017 book titled Embattled Freedom: Chronicle of a Fugitive-Slave Haven in the Wary North. Remsen tells the complex story of Waverly, and Northeastern Pennsylvania as a whole, during the Civil War era and profiles many of the central figures highlighted on the Destination Freedom tour.

The initial permanent settlers to Waverly, known at its formation as Abington Centre, began to descend upon the densely wooded pocket of Northeastern Pennsylvania in the early 1820s. As the village grew and its residents established a community, national matters would transform Waverly into an important hub on the trail to freedom for the men, women, and children looking to escape bondage in the south. This transformation put Waverly in a position to serve as a microcosm of the complicated nature of northern society during the 19th Century.

By examining the experiences of Waverly’s early settlers and the both slave and free born African Americans who came to call the village home, Destination Freedom has a unique opportunity to bring this history to the public. The debate over symbols associated with the Civil War era has pushed the importance of understanding this complicated time period to the forefront of national thought. Besides organizations like the National Park Service, school districts around the country are also looking to address how to properly contextualize this topic in the classroom. The Destination Freedom Program could not be in a better position to help assist schools and other organizations in their desire to develop curriculum and programming.

The important first step in discovering this history is to stop by the Waverly Community House and take the tour for yourself! Give us a call at 570-586-8191 to learn more information or to set up a tour! Due to the current pandemic and social distancing guidelines, tours are limited to groups of 10 or less and access to the Comm itself (including bathrooms) is limited so please plan your trip accordingly. We look forward to seeing you!

[ii] Sacco, Nick. “A Statistical Analysis of Visitation to National Park Service Civil War Sites During the Sesquicentennial.” Muster: Blog of the Journal of the Civil War Era. January 9, 2018.