“Gaspard D’Andelot Belin must be prominently identified with public affairs and movements for the betterment of Scranton and its people. He is dedicated to giving the most unselfish service to the community and many who know him speak of his devotion to his untiring efforts (Scranton’s most Interesting People: Scrantonian, 1927).”

Today’s blog post will be dedicated to the youngest Belin child, Gaspard D’Andelot Belin; born in 1888, Mr. Belin went on to leave his impression on the community through various business and philanthropic endeavors. He is remembered vividly in archival articles stored at the Waverly Community House not only for his involvement with the Comm, but for his intelligence regarding business matters and his dedication to charitable efforts. 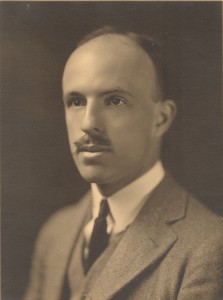 graduating in 1908. He began his career shortly after, starting as a silk mill worker at the Klots Throwing Mill in Carbondale, PA where he made just six dollars per week. After six short years, Gaspard became manager of the company showing dedication and perseverance in his career. He later joined the E.I. DuPont de Nemours and Company of Pennsylvania, where he eventually became President of the Executive Committee. In 1946, Mr. Belin became president of Scranton’s First National Bank, the largest bank in the area. In addition to his business related ventures, Gaspard held many positions in the community as well; some of his other involvements included: serving as President of the Scranton State School for the Deaf, Trustee and Treasurer of the Community Chest of Scranton, and President of the Community Welfare Association. He was also an active board member on the Hahnemann Hospital’s committee. In May of 1931, he attended the dedication ceremony for the Waverly Community House’s two additional wings where he presented the second family donation of land in facilitation of the expansion.

Mr. Belin died in 1954, but is fondly remembered at the Waverly Community House for his determination, and dedication to community welfare. The wing expansion is simply one of the ways Gaspard D’Andelot Belin has given back to the Comm and Waverly.