“When we started the Waverly Community House, many people thought and told us we were dreamers. We admit we are dreamers; we have envisioned the ideal community. We belong to the order of men and women who know that the ills, blights, limitations, disabilities, and curses from which human society suffers can be greatly abated, and many of them entirely eliminated. We see the time coming when all reasonable desires and ambitions shall enjoy a certain satisfaction. Pessimism cannot paralyze our faith. We dream with our eyes wide open and every faculty alert.” Paul Belin,  Waverly Community House Annual Meeting, 1927.

Since 1919, the Waverly Community House has served individuals and families in the region through educational, recreational, and cultural opportunities. Its mission has remained true to the manifestation of the Belin Family’s desire to enrich and enliven rural community life in the early 20th century. This dream became reality for Margaretta Belin and her children on July 26th, 1919 when the cornerstone to the building was laid, followed by a formal celebration, solidifying its emergence into our region and its place in local history. 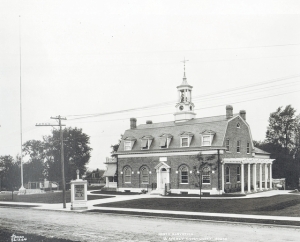 Since that day in 1919, the Waverly Community House has gone from what many may have viewed as a luxury, to a necessity. The Comm is where the community gathers in celebration of birthdays, holidays, and receptions. The Comm is where individuals come to receive education on a multitude of topics ranging from Medicare to the Underground Railroad. The Comm is also where children gather to do homework, interact with friends, and learn about various topics ranging from art to science. The Comm is home to an After School Program, an Artisans’ Marketplace, an Archive, dance classes, health and wellness classes, walking tours, and many more activities designed for community enrichment and engagement. The Comm is where the community receives their mail, greets their neighbors, and plays tennis. The Comm has withstood the testament of time and has served the community through tumultuous times within our country’s history such as World War II. It has remained a place of comfort for decades– now, a century of service. For the many individuals and families in our region, the Comm is home.

In celebration of its 100th year of service and dedication to the community, the Waverly Community House recently kicked off its Centennial Year. This year will focus on honoring the roots of our organization (its founders, mission, and history), while also looking forward to its future. This wonderful milestone commenced on the weekend of July 26th, 2019 in order to honor the Comm’s Cornerstone Ceremony 100 years ago. The recent celebration began on the Comm’s Front Lawn with a flag raising by members of the Clarks Summit VFW Post 7069 and Honor Guard. Abington Heights Middle School student Ethan Cutillo led the audience with a rendition of “God Bless America,” followed by remarks made from: Bridget Kosierowski (114th Legislative District), William Byron and Christine Capozzi (Waverly Township), and Mary Ann Savakinus (Lackawanna Historical Society), among others. Children from Comm Camp also honored our founders by performing a play entitled “Margaretta’s Gift,” inspired by Belin Family letters and quotes. The Comm Square Fair kicked off that evening at 5 pm featuring music from the Molly Pitcher Path Band, a caricaturist, balloon animals, dunk tank, and various fun-filled games and activities.

A more formal program kicked off on Saturday with welcoming remarks from Hedrick Belin (great-great grandson of Margaretta Belin). Additional speakers were: Mary Belin Rhodes (great-granddaughter of Margaretta Belin), Rick Lewis (nephew of Comm architect George M.D. Lewis), Bridget Kosierowski, and William W. Scranton III (Lieutenant Governor of PA), among others. Doug Smith’s Dixieland Band performed after the program, before guests were then encouraged to take tours of the building’s centennial exhibits. An old fashioned barbecue hosted by Pat and Tara Atkins, and catered by Epicurean Delight began at 1 pm. The Destination Freedom Underground Railroad Walking Tour of Waverly followed at 2 pm, hosted by EJ Murphy. In true Comm fashion, all of these events were offered to the public free of charge in celebration of our 100 years of service.

As we now embark on our Centennial Year, we have many events planned for the near future including: Cocktails for the Courts, the Comm Classic Centennial Golf Tournament, Antiques Show, Artisans’ Marketplace, and the Centennial Masked Ball. We are also accepting donations of memorabilia and items for our Centennial Time Capsule, which will be sealed at the 2020 celebration for the next 25 years. Keep checking our website for updates on these activities and events, or call the Comm at (570) 586-8191. 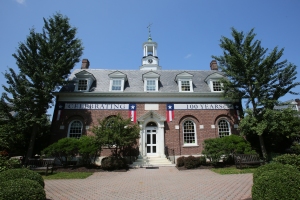 “Goals (for the Comm) were bold– to build the community, to build a civil society, to build a sense of civic engagement, responsible citizenship, and civic philanthropy. And it was based on shared responsibility– not just for this place, but for the ideals that it represents. A shared responsibility both financially and ideologically to unite around the concept of community for its citizens. Fundamental question– will you join in the goal of enriching community life?” Hedrick Belin, Centennial Ceremony, 2019.

One thought on “100 Years of History: Celebrating the Centennial Anniversary of the Waverly Community House”