In 1920, Waverly Community House Historical Committee Chairman Alfred Twining published a series of articles centered on the rich history of the Abingtons. This series premiered in October of 1920 and is regarded as a very rare collection. In today’s blog post, we will explore Twining’s work by focusing on his significant piece written about the Waverly Community House.

“This House Builded for the People of This Community In Memory of Henry Belin Jr.”

It is fitting to end my series of articles on “Historic Abington,” with the story of the priceless gift to the present and future generation of Abington, which in its emerald setting is an architectural gem, the inspiration of George Lewis of Scranton. On a marble block above the main entrance door to the building are inscribed the words as above. 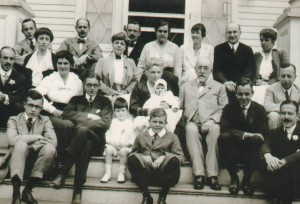 integrity, social standing, and prominence in various lines of righteous endeavor, made him conspicuous in the city’s history, passed to his reward on Christmas Day, 1917. Mr. Belin was a lover of the Abington country, and one of his greatest enjoyments for years, was his fine mansion and well ordered grounds at “Glenverly,” on the Waverly road almost at the boundary line between Waverly and Glenburn. Mr. Belin had long thought of some gift to Waverly, to show his appreciation of the beautiful Abingtons and the people therein with whom he had come in contact, but had not fully formulated the plan he had in mind. Upon Mr. Belin’s death, his widow, Mrs. Margaretta Belin, whose generous gifts to local endeavors in Waverly, and her kind and democratic personality, conceived the idea of a memorial to her husband, that would be of usefulness and value to Waverly, which would benefit the future as well as the present people of the village. The plan of a Community House was discussed with her children, with which they heartily concurred and the machinery was set in motion to purchase the site and plan for the edifice. It is largely due to the energy and devotedness of Mr. Paul B. Belin, that the project was consummated with dispatch and perfectness.

The informal opening, nearing the completion of the building took place in April of 1920, at which Mr. Paul Belin made a fine address in which he outlined the purpose of the Community House, in which social service was the main object where there would be a center for farmers and for local residents to have an attractive diversion, where meetings for good purposes could be held, a place to read, write, and have amusements, which would enable the youth and older people to have privileges and enjoyments without having to go to the city to obtain them. The various officials, committees, etc., were announced, and Mr. Belin said upon the completion of the grading grounds, interior furnishings and other objects in view, there would be fitting ceremonies before the Community House and grounds were turned over by Mrs. Belin to the borough.

The dedication of the Community House took place on the evening of June 25, 1920, prior to which Mrs. Belin entertained Governor Sproul of Pennsylvania, with other guests at a dinner at “Glenverly.” The beautiful building, glowing with electric lights, indoors and exteriorally, the grounds, which had been graded, sodded and beautified by the landscape artist, were most inviting, and the program arranged was carried out with a delightful smoothness. Governor Sproul, Judge George Maxey and Rev. Joseph Odell were the orators, and Mrs. Belin, whose kindly smiling face glowed with the warmth of congratulations and praise showered upon her by the speakers for the munificent and most beneficial gift to the community, was a central figure. It was an occasion not to be forgotten, when Mrs. Belin turned over the deeds and property of the Community House to the borough trustees.

The social needs of the community are amply considered, and from the little folks to the oldest people there is something of pleasure and profit to be gained in the use of the Belin Memorial. The recreation rooms are not open on Sunday, but the reading rooms and verandas are to be used after church hours. The building is 100 feet deep and 80 feet wide, and stands in a plot that is 365 x 165 feet. The edifice embodies all that its name signifies. It shelters various local activities, including the first department equipment, the post office, barber shop, council chamber, an auditorium with stage and dressing rooms, moving picture booth and library. The basement contains two bowling alleys that are the delight of the countryside; two billiard tables, dressing room and shower baths; the Boy Scout room, ice storage room, deep well pump and pressure room, boiler room, fire department, for village chemical and hose wagon, and the village lock-up.

On the first floor an imposing entrance leads directly into the lounge hall with large stone fireplace and oak seats. This room is 28 x 32 feet, and from it opens at the left, the women’s club room, 16 x 21 feet, richly furnished in mahogany and handsome upholstery, with a fireplace. There is an enclosed sun porch 14 x 32 feet furnished in wicker. The canteen and soda fountain open to the right and are beautifully equipped. The cigar and confectionery cases are in this department. The post office had bronzed boxes with combination key less doors. The auditorium seats 200 and the arcaded terraces open from it toward the west. The second floor provides a balcony for the auditorium with a moving picture booth. The library used also for the council room is very impressive with its Old English ceiling, open beamed and grained.

The supervisor’s apartments are on the opposite side of the hall. There are also bedrooms, bathrooms, linen rooms and a balcony overlooking the playgrounds. Tennis courts and playgrounds for the children occupy much space about the building. The social rooms are rented for teas, dances, and other affairs by those from Scranton and elsewhere who wish to enjoy the advantages thus provided. The building and grounds are free for the people of Waverly and its vicinity.

I may add that Mrs. George C. Peck, wife of Dr. Peck, former pastor of the Elm Park Church in Scranton, a charming lady, who is specially adapted to the work from her church, Red Cross war work, and social activities, is the head of the Community House.

It must be a source of satisfaction to Mrs. Margaretta E. Belin to note the appreciation of the people of Waverly in the enthusiastic manner in which young and old use the facilities and advantages of the Community House, in the varied features which it presents.

On July 14th, a Woman’s League for political education was organized with 25 paid members and numbers 62 at present.

On July 14th the children’s playground was opened and during the last half of the month 975 boys and girls took advantage of the recreation afforded.

On July 14th the Boy Scouts organized with a dozen members.

On August 16th, Mrs. Frances Jermyn Belin, as a memorial to her mother, provided a community trained nurse, services free to the people of Waverly.

The library and reading room are well patronized, as well as the tennis court, baseball grounds, and the Saturday evening movies.

The Radcliffe Chautauqua presented a delightful course on July 26th, 27th , and 28th,

this will be an annual event.

On October 8th and 9th a community agricultural fair was held, the exhibition of fruits and vegetables exceeding in quality and quantity anything seen at the Autumn county fairs in Northeastern Pennsylvania.

Alfred Twining died in May of 1922; his series on the Abingtons ran in the Scranton Times in October of 1920.