The American Civil War remains one of the defining events in United States history; between 1861-1865, American soil was inhabited by conflicts, battles, and general unrest. This four year war between the Union and Confederate armies forever changed the country’s dynamic leaving lasting effects throughout the nation. This crucial period in American history is recognized and commemorated through publications, archive collections, and various other means of remembrance. One particular way that the Civil War stays in American memory is through the organization of veterans groups and associations designed to serve as a meeting ground in the post- war world dedicated to linking individuals together through their collective war experiences. In addition to providing a refuge for runaway slaves during the Underground Railroad Movement, Waverly also served as a significant meeting ground for the aforementioned early Veterans’ Association meetings following the war. These meetings were held at the Waverly Community House and were well received and highly attended; this is exemplary of the Comm’s dedication to community needs throughout history.

The Civil War Union Veterans’ Association of the counties of Broome, NY, Bradford, Lackawanna, Luzerne, Susquehanna, and Wyoming Pennsylvania will hold their reunion at the Waverly Community House in Waverly, Pennsylvania on Friday July 29th, 1927. It will be held at 9 am and continue all day. Two bus lines will leave Scranton for Waverly as follows: the Scranton and Binghamton area has a bus leaving from the station at 231 Wyoming Avenue at 8 and 10 am, returning bus leaves Waverly at 2:10, 4:10, and 6:05 pm. There is another bus leaving from the 600 block of Lackawanna Avenue near the D L& W Station at 9:30 am and 12:40 pm. This bus leaves Waverly at 3:34, 6:04, and 9:14 pm. This invitation is extended to members of the Womens’ Relief Corps, Daughters of the Union Veterans, GAR Circle and their auxiliaries, and Sons of the Union Veterans and their auxiliaries. Dinner will be served free to all present. Hoping a large number will come and “Rally around the Flag” once more.

A short time later, a follow up letter was sent to the Waverly Community House addressed to Paul Belin. This archival piece reads as follows:

At the Annual Meeting of the Seven County Reunion, held at the Waverly Community House on July 29th, 1927, a resolution was adopted to send you a tremendous vote of thanks for your kindness in carrying out your mother’s wishes and making it possible for us to have one of the most enjoyable reunions ever held. Everything certainly was arranged for the comfort of all present and we want you to feel that we highly appreciate it.

Finally, an additional letter sent to Mr. Belin from the Daughters of Union Veterans indicates: 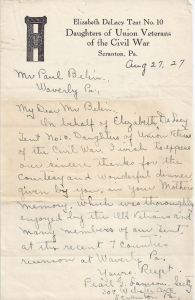 On behalf of Elizabeth DeLacy Tent N. 10 Daughters of the Union Veterans of the Civil War, I wish to express our sincere thanks for the courtesy and wonderful dinner given by you, in your mother’s memory, which was thoroughly enjoyed by the old veterans and members of our Tent at the recent Seven Counties Reunion in Waverly PA.

In the letters above, it is revealed that Paul Belin served as one of the principal organizers of the reunion dinners in memory of his mother Margaretta; her death that preceding February remained in the background of the occasion however, it respectfully did not overshadow the primary message of the event– to honor the Union veterans of the United States. These types of events became prominent throughout the country in the years following the Civil War which demonstrates the national imperative to collectively commemorate this period of time in American history. The Waverly Community House, still relatively new at the time, certainly made an impression on the authors of the above written letters by serving as a meeting ground for their much valued reunion. In the years to come, the Comm would develop and serve the community in various similar ways; with its centennial anniversary approaching, all of these ways will be highlighted in our blog and we look forward to continuing to provide our readers with these significant historical milestones.