“We are always glad for the opportunity to turn the pages of the year and there we find much interest and significance. We find a spirit of helpfulness, friendliness, and cooperation among our staff and community members. The same spirit brings us excellent volunteer leaders for our clubs and classes; it has also brought us a community Christmas tree from the Waverly Grange. It has made possible the work of various committees and the Board of Trustees, and the great success of our programs. On the page of memory, which will remain with us always, we find the meaning of true friendship in the interest, understanding, sympathy, and generosity of Mrs. Henry Belin Jr. who has made possible for us this work.” (Gertrude Coursen, December 1929)

The Waverly Community House has always finished each year with both new and traditional programs to celebrate the spirit of the holiday season with community members. As the Comm brings another promising year to a close, this post will serve to reflect on some of the historical celebrations of years past.  We would also like to remind everyone that the Waverly Community House Archives is open daily through appointment for anyone who would like to access our space; contact information will be supplied down below. Stay tuned for updates, volunteer opportunities, and more via our blog; we have lots of new developments which will be taking place in 2018. 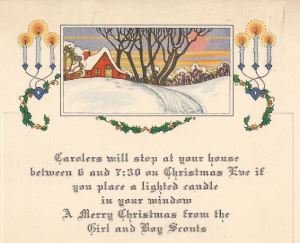 Seasonal Christmas Productions: Theatrical productions served as a prominent way that the Waverly Community House would celebrate the holiday season. Such plays would take place during the month of December and would feature a different theme each year. On December 20th, 1944, the annual play was titled “the Community Christmas Program” and was directed by Frances Dewey Fausold. The production was held at 8pm in the Comm’s auditorium and was heavily inspired by the work of playwright Joyce Vernon Drake. This year, community members can look forward to attending “A Christmas Carol” at the Comm performed by Robert Hughes this Friday, December 15th at 7pm; it is open to the public and light refreshments will be served.

Music Programs: In a similar fashion, the Waverly Community House held a variety of musical programs to ring in the Christmas season. On Christmas night, 1941 the Comm held a candlelit caroling program featuring songs, poems, and stories. The accompanying piece to this production features performances such as:

“The Holly and the Ivy” (solo)

“A Carol for the Children” (poem)

This program ended with a story entitled “The House of Christmas,” and was heavily attended by community members after their family gatherings.

Another way the Comm celebrated the season with music was through the organization of Christmas carolers. Each year, beginning in the 1930’s, the Boy and Girl Scouts would assemble a gathering of Christmas carolers to travel the neighborhood stopping at each house with a lit candle in their window. This tradition would typically take place on Christmas Eve and lasted for nearly a decade.

Community House Canteen: The Waverly Comm Canteen would also partake in a festive overhaul during the holidays; in early December, notices were sent out reminding community members that the Canteen was stocked up on Christmas candy for the public to utilize as gifts. A December 9th, 1933 notice reads as follows:

“Save yourself a trip to Scranton and order your family boxes of Christmas candy at the Community House Canteen. We also have decorated wrapping paper, twine, Christmas cards, and seals.”

Community members certainly took advantage of this offer, often purchasing many of their holiday essentials at the Waverly Community House Canteen.

Toy Donations: Toy donations were one of the many ways the Comm encouraged community members to give back during the Christmas season. During the winter months, the Comm would take donations of gently used toys and other items to donate to those less fortunate. Any broken toys would be repaired at the Comm before given out at the Annual Children’s Christmas Party. Many members of the public participated in this activity and began the Christmas season in the spirit of giving through the Waverly Community House.

The Waverly Community House Archives is located in the Comm’s South Wing; we can be reached at (570) 586-8191 ex. 7, or via email at greviello@waverlycomm.org.

3 thoughts on “‘Tis the Season: Holiday Celebrations at the Waverly Community House”