“Much could be accomplished if we keep in mind that we want to educate through recreation. It is said that the children of Waverly know only “how to play.” I wish that I thought they did know how– Oh, I would feel much had been accomplished.” (Paul Belin, 1929)

As part of its mission statement, the Waverly Community House has always placed a significant amount of emphasis on the importance of recreation, especially as it relates to the children of the community. Consequently, it goes without saying that one of the most utilized spaces at the Comm is the beloved playground which is always encompassed with the sounds of laughter and amusement– especially during the warmer months. The cherished background of this structure also contains its own historic narrative, one that signifies the importance of working together as a community to construct a gift for all to enjoy. 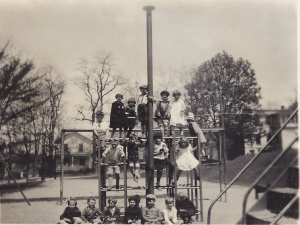 building itself; shortly after the Comm opened, the kindergarten classes began utilizing the space for recreational playtime, an important component of their studies. The notion of physical education was weaved into all aspects of the curriculum and was reiterated by both the Belin family and the staff who  believed it to be crucial to a child’s development. The first playground contained a jungle gym, a slide, and swings; many children took great pleasure in using the space for playtime and continued to become well rounded both mentally and physically. Having a space for children to engage in physical activity was also a fairly innovative idea for the 1920’s and corresponded with efforts nationwide to promote the concept for children everywhere– once again, the Waverly Community House was ahead of the curve and remained a revolutionary institution in America’s ever changing landscape.

In 1990, the Waverly Community House entered into a new era with plans for a new playground; this time, the space was given a complete overhaul when more than 100 volunteers from the area worked together to build a wooden facility complete with more space for children to use for various entertaining activities. This new space was also built with the help of the Pennsylvania Recreational and Rehabilitation Grant and was given a dedication in the name of Robert S. Leathers, who devoted much of his time towards designing playgrounds in community areas nationwide. This playground remained in use for many years until 2011 when another tremendous community effort helped construct the space that remains in use today.

After nearly 20 years of use, and visible wear and tear, the cherished playground was in need of repair and necessary updates. Consequently, in 2011 the Waverly Community House’s “Playground Project” was launched. In August of that year, after months of organization and fundraising efforts, community members gathered at the Comm equipped with their tools and enthusiasm to help reconstruct the recreational area which many volunteers, both young and old, remembered fondly. The former structure was torn down board by board as many worked tirelessly to get the project completed in a timely fashion. Groundbreaking for the event took place on August 24th, 2011 and Waverly Township Supervisor Ron Whitaker commenced the gathering by remarking on the great turnout and eagerness displayed by those who devoted their time towards the project. Among those in attendance were: Comm staff members, Abington Heights football team members and students, college students, young adults, older residents and more; most of those partaking in the reconstruction had fond memories attached to the playground and were eager to help give it its much needed face-lift. Ultimately, more than 600 people came out to help with the project and the finished product is the current playground in use at the Community House today; the structure continues to receive routine maintenance throughout the year and remains a very important part of the Comm’s daily operation.

The Waverly Community House playground signifies the importance of what can be achieved through community engagement, dedication, and interaction. It is a testament of community building and undoubtedly remains a significant part of the Comm’s history.