“We belong to the order of men and women who know that the ills, blights, limitations, disabilities, and curses from which human society suffers, can be greatly abated–and many of them entirely eliminated. Pessimism cannot paralyze our faith; petty and vicious factors cannot dim our optimism.” (Paul Belin, Annual Meeting 1927)

Paul Beck Belin, son of Henry Jr. and Margaretta, will be the focus of today’s Community 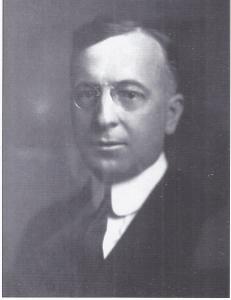 Member Feature. As the couple’s oldest son, Paul emulated his parents in many ways, especially as it pertains to both business and philanthropy. Paul was involved in various community related activities and organizations. He also played a pivotal role in the construction of the Waverly Community House to which we are eternally grateful. Nonetheless, the legacy that Paul has left is one that is entirely his own; it is one of promise, hope, and optimism; these sentiments all live on through the Comm’s various programs and activities.

Paul Belin was born on July 26th, 1875; as a young adult, he attended both Yale University and Columbia University before embarking on a brief career in architecture. In fact, it was his knowledge on the subject, as well as his rapport with George M. D. Lewis that influenced family members to contract Lewis to facilitate work on the Comm. However, much like his father, Paul was more interested in business and in 1898, he began his career at the Scranton Lace Company as Treasurer and General Manager of the facility. He remained in that position until 1918 when he then took over as company President.

During his time at Scranton Lace, Paul quickly became known among employees as a generous and kind employer; this was much attributed to his interest in and concern for the general welfare of his staff. One of the most revered gestures associated with Mr. Belin’s benevolence came during an employee dinner in October of 1928; at a reception hall in Green Ridge, the company President personally distributed cash and securities amounting to more than a half million dollars to approximately 200+ valued staff members. This event became well known throughout the area and was significantly covered in all local media outlets; Mr. Belin’s actions that night became historic in nature and his staff members remained in awe of this kind deed. In addition to financially rewarding his employees, Paul Belin took great interest in the mental and physical well being of men and women working at the company. In the same manner as his father, Paul continued the tradition of workplace recreation with the implementation of leisure spaces throughout the plant; in these designated rooms, staff members enjoyed various activities such as; dancing, gymnastics, and socializing. He also opened up the pool at his estate, “Lenni” several days a week throughout the summer months for employee swimming, this idea was virtually unheard of at the time and added to his reputation as a generous innovator in the industry. These acts of kindness paid off for Mr. Belin in the form of employee loyalty; during his time at the plant, one of which transpired during the height of workplace strikes in America, the Scranton Lace Company remained one of few facilities in the area to never have a walkout. Under his leadership, the company prospered, and became known throughout the United States as a leading industrial enterprise. 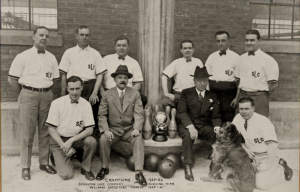 In addition to his involvement with the Scranton Lace Company, it goes without saying that Paul Belin was a key contributor in the creation of the Waverly Community House. Along with his mother and siblings, Paul remained dedicated to preserving and memorializing his father’s memory in the form of the recreational facility. In fact, many of the early programs were heavily influenced by Mr. Belin and he continued to be very involved with the Comm until his untimely death in 1930. A quote in his Scranton Republican obituary discusses Mr. Belin’s legacy as follows:

“There is profound reason for mourning the loss of this man of talent, outstanding personal character and personal growth; this man who year after year placed on the altar of public use and quiet charity so large a share of the success won by himself, this man who combined energy of action with deep thoughtfulness. He did his duty to all, and he measured his duty by standards so generous that those in the sorrow of bereavement may find consolation in the honor in which his memory will be held.”

Paul Belin’s memory lives on at the Comm not only in the form of our programs and activities, but also in the spirit of community and giving, which is first and foremost in our purpose.