As Memorial Day approaches, it is important to shed light upon the Waverly Community House’s everlasting dedication to honoring the men and women of the United States Armed Forces. Since the Comm opened its doors in 1920, both the staff and Board of Trustees have made it part of their mission to promote programs and events which give distinction to our valued veterans of the US. Each year in May, the Comm was the gathering place for the commencement of the annual Memorial Day Parade; this parade began at the Community House flagpole with an assembly ceremony which included the Pledge of Allegiance, a salute to the veterans, and the presentation of wreaths to be laid at Hickory Grove Cemetery. The procession would then make its way to Hickory Grove to continue the dedication services. 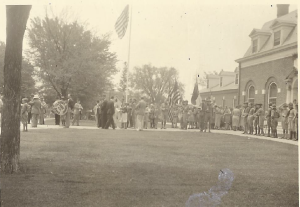 In addition to being the host of the parade’s launch, the Waverly Community House was also affiliated with the creation of a very significant development at Hickory Grove. In 1928, the Comm’s Board of Trustees generously funded the construction and dedication of a 28 place plot titled the Soldier’s Memorial Lot. This area remained the final resting place for ex-service men of the United Stated Armed Forces and was greatly appreciated and fondly remembered by all involved.

The traditional Memorial Day assembly at the Waverly Community House lasted for decades and continued to bring members of the community together to remember and honor those who have served our country. One 1964 newsletter referencing the ceremony reads as follows:

“This Memorial Day observance [1964] has been conducted over many years at the Hickory Grove Cemetery through the efforts of the Waverly Community House, the Clarks Summit Post of the American Legion, and the Veterans of Foreign Wars. Two very beautiful wreaths have also been given for this occasion: one is placed on the grave of the late Paul Belin, and the other has been set at the Soldier’s Monument. This annual remembrance comes from Besancon’s Florist of Scranton. It was started by the late Miss Aline Besancon and has been continued by Miss Ruth Leonard. We are most grateful.”

The Waverly Community House continues to dedicate a great portion of its time towards honoring those who serve our country; some current events which serve to honor our country and our veterans include the September 11th Remembrance Ceremony and the Veterans Appreciation Dinner to name a few.

We will close this blog post with the following passage from a 1927 letter written to Paul Belin by the President of Union Veterans of the Civil War regarding the reunion held at the Waverly Community House:

“At the Annual Meeting of the Seven County Reunion held at the Waverly Community House on July 27th 1927, a resolution was adopted to send you a vote of thanks for your kindness in carrying out your mother’s wishes and making it possible for us to have one of the most enjoyable reunions ever held. Everything was certainly arranged for the comfort of all present, and we want you to know that we highly appreciate it.”

We hope everyone has a safe and happy Memorial Day from the Waverly Community House!

One thought on “Honoring our Veterans: Memorial Day at the Waverly Community House”