In 1958, yet another memorial gift was bestowed upon the Waverly Community House; in the same manner as the other projects,this contribution came in the form of an additional commemorative extension to the building. In 1945, after the death of his wife Frances Jermyn, Belin son F. Lammot began plans for an auditorium expansion in her memory. Frances Jermyn Belin was born in Scranton in 1888 and spent many of her younger years in Waverly before she married F. Lammot and settled down in the area permanently; she also had significance during the Comm’s early developmental years by providing funds for the salary of the Community House Nurse.

In preparation for the auditorium addition, a special Building Committee was formed by the Board of Trustees; this committee was appointed to oversee the endeavor. Also, in the same manner as the other building projects, architect George M.D. Lewis was once again retained to facilitate the extension. This time, Lewis collaborated with R.D. Richardson Construction Company in the process.

Additions and improvements to the building during this undertaking included: new lighting and ventilation systems in the combination gymnasium/theater, a larger stage, extended seating capacity, 4 bowling alleys containing automatic equipment, and a new heating plant for the entire building. Of the new space, and its progress, Trustee President James Vipond stated: ” If you have not observed the additions progress over time, just ask your kids. They have been around here mostly everyday checking to see that the correct amount of sand and water is going into the mortar.”

The Frances Jermyn Belin memorial extension dedication ceremony took place on September 28th, 1958 and was covered by all media outlets. At the event, the audience sang “America the Beautiful,” and heard G D’Andelot Belin Jr. speak about the building and its history. The opening quote from the dedication booklet reads: “Today, September 28th, 1958 marks the official opening of the new auditorium wing of the Waverly Community House. The new building is given in memory of Frances Jermyn Belin, wife of Ferdinand Lammot Belin. We honor them both on this occasion. Friends of the Waverly Community House wish to thank Mr. Belin for this beautiful building, a loving tribute to his wife.”

Today, the Frances Jermyn addition is used quite famously for exterior Comm Camp 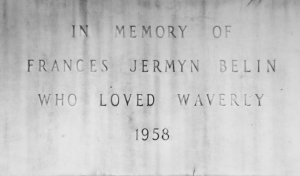 photographs. The enlarged auditorium also provides ample space for additional seating, various vendor related events, and theatrical performances. Ultimately, as with all of the Comm’s other extensions, what once originated as a memorial gift has continued to provide community members with additional space needed to partake in more of their beloved programs and activities.