“Eighty years ago when we started the Waverly Community House, many people thought and told us we were dreamers. We admit we are dreamers, we dream with our eyes wide open and every faculty alert.” (Paul Belin, Annual Meeting, 1927)

In 1927, after a brief illness, Belin family matriarch Margaretta Belin passed away; naturally, the remaining Belin children wished to commemorate their beloved mother in the same manner as they did with their father Henry Belin Jr. Therefore, it was only fitting that the Waverly Community House, and its expansion, became the focus of commemorative effort and attention. It was also around this time that the WCH began to see an increase in community program interest, especially regarding the kindergarten classes; however, during this period, the classes did not have a room to call their own and frequently utilized whatever space was available in the building. It did not take long for the Belin children to suggest a solution to this problem, while also demonstrating the notion to memorialize their mother; the building was to be expanded with the addition of two wings on each side of the original structure. As with the original construction, architect George MD. Lewis was recommissioned to work on the expansion. 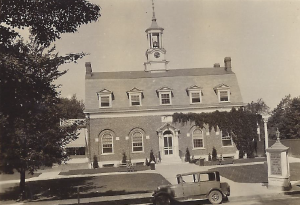 Unfortunately, the Belin family was dealt another tragedy when Paul Belin passed away unexpectedly following an operation in 1930; he was sadly never able to see the finished extension of the Waverly Community House. However, he was remembered and honored at the dedication ceremony in 1931 when the finished product was displayed for community members. Text from the Scranton Times article covering the event reads as follows: “Hundreds of people from the little village of Waverly will be present in the auditorium of the enlarged Waverly Community House, which will be formerly presented to them with impressive ceremonies this afternoon [May 9th, 1931], at 3:00. The two new wings were built as a memorial to Mrs. Belin by: Mrs. Pierre du Pont [Wilmington, DE], F. Lammot Belin, G D’Andelot Belin, Mrs. Paul Belin, Mrs. N. G. Robertson, and the late Charles Belin who died recently in Arizona. The original building was built in 1920 by Mrs. Belin in memory of her husband. The building, including its original structure, was designed by George MD. Lewis, of the firm Davis and Lewis [Scranton Times, May 9, 1931].

And so, the tradition of commemorating loved ones through substantial community gifts continued after Margaretta’s death. After construction, the wings enabled community members to have more space to engage in beloved programs and the kindergarten classes finally had a room to call their own. Presently, the two additional wings accentuate and add to the Waverly Community House today  and are are fully utilized as space for crucial programs. The North Wing features rooms used for: Upstairs Thrift, the Visitor’s Center, Story time, Tots and Toddlers music classes, yoga, and much more. 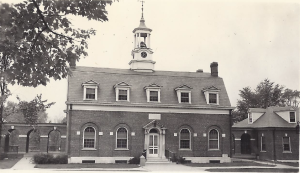 Meanwhile, the South Wing contains: the Library, Constance Reynolds Belin Room, and the Archive. The structure now fulfills the entire vision put forth decades ago by the Belin family and continues to give to the community each and every day.

One thought on “The Giving Continues: The Waverly Community House’s Two Wings”